IRL policy researchers have clearly identified that the need for competition in credit lines for SMEs is vital to facilitate a more uniform economic development across rural areas and by its design, across the country as a whole.

To address this deficit IRL calls for the setting up of a nationwide network of “Local Public Banks”, which are managed independently but with an identical business model working under both a uniform management and ethical principles. Such banks would facilitate the development of regional based economies through the creation of a virtuous economic cycle within the regions while also folding its profits back into the local communities.

“The financial crisis of 2007-08 provided an opportunity to develop a new economy, more attentive to ethical principles” Pope Francis1

“There should be a second tier of Banking which is geared more towards local concerns, with local managers and a greater level of local awareness”

The “Local Public Banks” will lend differently to existing banks. Primarily the banks will have the expertise to lend based on cash flow analysis and not purely collateral based. Furthermore loan decisions will be made at local level, based on accurate local knowledge of local SMEs. Also the bank will not have shareholders, who require profit maximization to receive dividends but will be stakeholder oriented with no dividends to pay. These characteristics ensure a pattern of counter-cyclical lending emerges so small companies are not starved of finance when they need it most.

IRL CEO Seamus Boland recently raised this as one of the rural issues to be examined at the recent National Economic Dialogue at which it received a very positive hearing both from senior politicians and many other participants at this event and prompting a degree of closer examination.

This model of banking is a means of focusing in on SMEs, many of which are the main employment generator in rural towns and villages, and widely recognised as the backbone of any economy.

To augment its belief in this model, IRL recently (July 10th) made a submission to the “Action Plan for Jobs” Initiative to the Department of Enterprise, Jobs & Innovation with a “Concept Document” that included both a regional and national plan. The research for this document was carried out over a six-month period with the assistance of the Savings Bank Foundation for International Cooperation (http://www.sparkassenstiftung.de/en/about-us.html). The SBFIC foundation was set up in 1992 by the Sparkassen (Savings Banks) in Germany to provide technical knowhow to countries that want to set up similar banks, with the emphasis on developing prosperity within the local communities, synergies that are part the core values of IRL.

We have a working template, an opportunity to achieve this goal and it is hoped that our politico will examine this proposal closely giving us an alternative to compete within the current banking system, which is calculated in favour of the people. 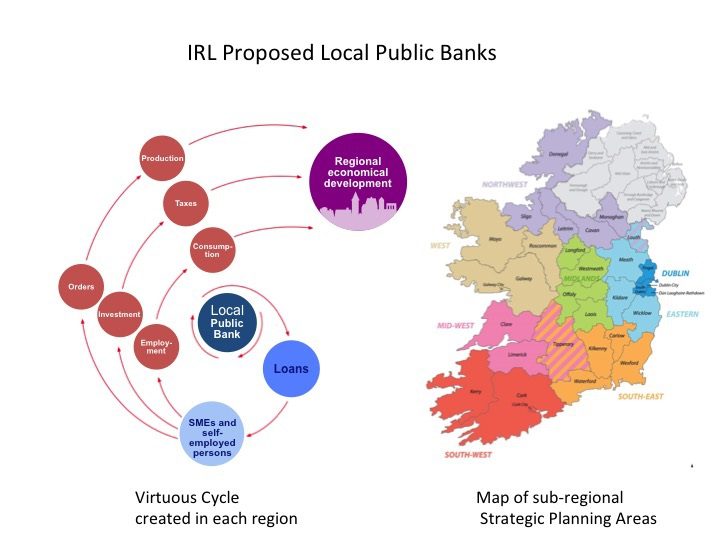 One of Ireland’s greatest philosophers and empiricists but least known for his work on monetary policy, George Berkeley regarded as the precursor to Adam Smith who is known to have studied Berkeley’s works.

Following what is now regarded as the first global bubble that effected Ireland’s economy, the South Sea Bubble, Berkeley proposed the following:

“A Bank wherein there are no Shares, would be free from all the Evils of Stock-jobbing [Speculation]. A Bank, whereof the Publick makes all the Profit, and therefore makes good all Deficiencies, must be most secure. Such a Bank prudently managed, would be a Mine of Gold in the hands of the Publick…..The Advantages of such a bank in restoring Credit, promoting Industry, answering the Wants, as well of the Publick as of private Persons, putting Spirit into our People, and enlivening our Commerce, will, I suppose, be evident to whoever shall consider the Queries of late proposed to the Publick”6&7 George Berkeley, 1737.

1. Encyclical Letter Laudato Si’ of the Holy Father Francis on Care for our Common Home : http://w2.vatican.va/content/francesco/en/encyclicals/documents/papa-francesco_20150524_enciclica-laudato-si.html

3. “Conversation with Janet Yellen, Chair of the Board of Governors of the Federal Reserve System”